Swiss Parliament Votes In Favor of Adult Use Cannabis Legalization

ZÜRICH–Switzerland’s Health Commission of the Swiss House of Representatives, the Swiss National Council, in what will become an historic vote, has voted this past Friday, April 30th, in favor of legalizing cannabis for the Swiss. Adult-use of Cannabis in Switzerland is currently illegal, though minor possession was decriminalized to a fine in 2012.

The National Council’s public health committee voted 13 votes to 11 (with one abstention) to the parliamentary initiative by Representative, Mr. Heinz Siegenthaler (pictured). Essentially, the aim of the legislation is to regulate the cannabis market in Switzerland, rather than continue to ban Adult-Use.

This vote will make Switzerland the first country in Europe to allow a legal adult-use cannabis supply chain, according to reporting from Swiss news outlet, Zürichsee-Zeitung

The move means that Switzerland instantly joins the avant-garde of European cannabis.  However, this is only the first important hurdle for full legalization of cannabis in Switzerland. The bill next goes to the Swiss Senate, which is called the Council of States.

With this move, the National Council’s public health commission has  followed up on various other initiatives to legalize and regulate the cannabis market, rather than continue with the prohibition of adult-use cannabis. The proposed legislation has many features to protect Swiss consumers. 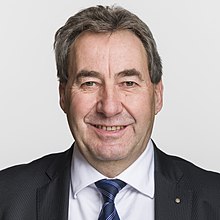 The Swiss Federal Office of Public Health noted they are conducting science-based consumer research trials on cannabis in order to offer “a scientific basis for the future regulation of cannabis.” These trials to check cannabis will be conducted in parallel to the legislation working its way through the representative chambers of the Swiss parliament.

The Swiss trial includes 5,000 registered participants, who already have been consuming cannabis illicitly. The trial program is a follow-up of an amendment to the Federal Act on Narcotics and Psychotropic Substances approved by the Swiss Government last September. The passed regulations enable a legal basis for conducting scientific pilot trials of cannabis.

The Swiss government’s research study requires that cannabis must be organic, produced in Switzerland and contain no more than 20% THC. The packaging requirements use the model of Canadian cannabis licenced producers, ensuring product containers are child-resistant, have safety warnings and the cannabinoid content of the products are clearly labeled, according to reporting in Neue Zürcher Zeitung.

Switzerland’s Federal Office of Public Health also released a statement that the current cannabis prohibitions are almost useless, as “despite this ban, consumption is high, the black market is thriving, and users’ safety is not guaranteed.”

According to some estimates, there are around 500,000 adult illicit cannabis consumers in Switzerland. Switzerland has already abolished criminal prosecution for possession of small amounts cannabis. Those caught with less than 10 grams only have to pay a CHF100 fine ($108.39). The sale of “light” cannabis with less than 1% THC is also legal in the country.

If passed, Switzerland not only becomes the first country in Europe to allow a legal adult-use cannabis supply chain, Switzerland might also beat the U.S.A. in legalization of cannabis at the federal level.

Recently, U.S. Senate Majority Leader Chuck Schumer (D-NY) said he plans to present a federal cannabis legalization bill soon. “I am going to put this bill on the floor soon. It hasn’t been introduced yet,” Schumer said, explaining he has been working with Senator Cory Booker (D-NJ) and Senate Finance Committee Chairman Ron Wyden (D-OR) on the measure’s draft. “Once it is introduced, it will go on the floor.”

This information was sourced from a variety of sources including Zürichsee-Zeitung and Neue Zürcher Zeitung.

SANFORD, Fla. - Patrick O'Brien is by no means just an ordinary cannabis enthusiast. This third-generation cannabis grower and American veteran has trained over 60,000 students at his five-acre indoor/outdoor cannabis college and farm in ...

KELOWNA, BC - The Valens Company Inc. (TSX: VLNS) (Nasdaq: VLNS), a manufacturer of branded cannabis products, today announced that it has secured an exclusive cannabis partnership with Coldhaus Distribution to provide logistics solutions for ...