JERUSALEM–If ever there was a person who deserved a Nobel Prize in Chemistry, it’s the famous Cannabis Scientist Raphael Mechoulam.  On November 5th, 2022, Professor Raphael Mechoulam celebrates his 92nd birthday.

The distinguished professor is a chemist and biologist. He is widely recognized as one of the greatest scientists in the field of cannabinoid research. Believe it or not, he’s still an active researcher, still working in his chosen field: cannabis. 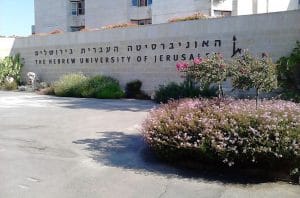 Born in Bulgaria, Mechoulam’s family emigrated to Israel in 1949. He obtained an MSc in biochemistry in 1952 from the Hebrew University of Jerusalem, and subsequently was awarded a PhD in chemistry from the Weizmann Institute near Tel Aviv. He followed these achievements with postdoctoral research at the Rockefeller Institute in New York. He returned to The Hebrew University of Jerusalem in 1965. There, he was appointed as Associate Professor in 1972 and as Professor of Medicinal Chemistry in 1975.

At The Hebrew University he began his world-famous cannabinoid research career. It all started from a fateful bus ride when he brought 5 kilos of Lebanese hashish he received from the Israeli Police to his laboratory at the Weitzman Institute in Rehovot.

With that material he was able to isolate and identify the psychoactive component in Cannabis, Tetrahydrocannabinol (THC), that had eluded scientists for decades. 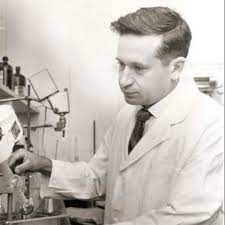 (Image: The Professor as a younger man)

When Mechoulam began his cannabinoid experiments in the ’60s, much research had already been done on the chemistry of the cannabis plant, including the elucidation of the structure of cannabinol. Research was permitted in those days, as the misguided and global War On Drugs hadn’t begun. It wasn’t until the next decade that US President Nixon famously (and falsely) claimed that Cannabis had no medical value and forced it to become a Schedule 1 drug.

From long hours in his lab, Mechoulam in 1963 first reported his isolation, structure elucidation, stereochemistry and activity of THC (Δ9-tetrahydrocannabinol-THC), the main psychoactive constituent of cannabis.

Also discovered was the isolation and structural elucidation and chemical synthesis of numerous additional cannabinoids, such as cannabidiol, cannabigerol, cannabichromene and some cannabinoid carboxylic acids; these discoveries began to understand the pharmacological actions of cannabis and its phytocannabinoids.

The evidence obtained in the late 1980s that mammalian tissues express the CB1 receptor immediately prompted searches for a chemical produced by these tissues that can activate this receptor. Ultimately, the race to discover such an “endocannabinoid” was won by Mechoulam. 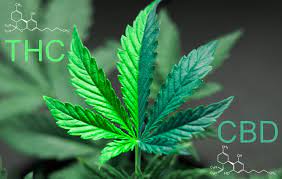 It was also Mechoulam’s research that provided evidence of N-arachidonoyl ethanolamine, which he and his collaborators named anandamide, a compound that activates the CB1 receptor, and that 2-arachidonoylglycerol is also a cannabinoid receptor-activating endocannabinoid.  Because of the lipophilicity of phytocannabinoids such as THC, Mechoulam decided to look for endocannabinoids among endogenous lipophilic compounds rather than endogenous peptides, even though endorphins had already been found to serve as endogenous activators of opioid receptors.

“I believe cannabinoids represent a medical treasure waiting to be discovered.“

“I have spent most of my life decoding the mysteries to be found within this incredible plant. The collective work on the plant has currently led to identifying a major physiological system, the endocannabinoid system, which appears to be involved in numerous human illnesses. I would like to see my colleagues forge ahead with their investigations, advancing even further the acceptance and integration of cannabinoids, in particular cannabidiol, its derivatives and the specific CB2 agonists, in traditional medicine.“

Understanding of the Endocannabinoid System

His discovery of the endocannabinoid system accelerated cannabinoid research.  Evidence subsequently emerged of the profound importance of the ECS in humans and how it plays important protective roles in several serious disorders both within and outside the central nervous system, raising the possibility that some disorders could be treated. 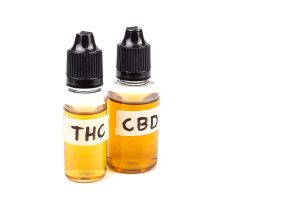 Design and Synthesis of Other Cannabinoids

Mechoulam’s other achievements included the design and synthesis of numerous important novel cannabinoids that serve as valuable experimental tools or have important therapeutic potential. These synthetic compounds include, amongst many others, HU-210, HU-211, HU-308 and HU-580. Thus:

(iii) HU-308 displays much greater affinity for CB2 than for CB1 cannabinoid receptors, and is a CB2-selective agonist;

(iv) HU-580 is a synthetic methyl ester of the phytocannabinoid, cannabidiolic acid (CBDA).

In all his research in the cannabinoid field, Raphael Mechoulam has demonstrated time and again a genius both to come up with breakthrough ideas and see them through to conclusion. His work has greatly helped to advance knowledge about cannabinoid preclinical and clinical pharmacology, biochemistry and medicinal chemistry, and to follow these ideas through to bring cannabis closer to regain its rightful place back in mankind’s pharmacopeia. Because his work in the fields of chemistry and biology has improved and will continue to improve millions of lives, and because of the profoundly good impacts on society, the economy and on humanity, Highly Capitalized Editorial Team believes he deserves the Nobel Prize in Chemistry.

Meanwhile, for his services to Cannabis, we salute Professor Mechoulam, and we wish him a very happy 92nd birthday later this year.