PARIS – France, inadvertently, is now leading the world in saving the bees by setting a benchmark in the global effort to save the bees and prevent “ecological Armageddon.”

This is very relevant to cannabis. Like any other crop, cannabis is dependent on pollination mostly from wind.  But the environment cannabis inhabits is mostly pollinated by insect pollination. So it’s all connected. 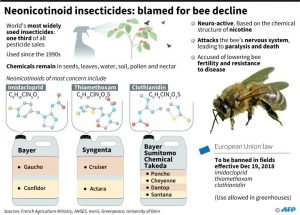 The French government has banned these three along with thiacloprid and acetamiprid, not only outdoors but in greenhouses. France now has banned all 5 of the neonicotinoid pesticides  researchers blame for collapsing bee populations.

The latest research suggests bees can develop a dangerous addiction to the insecticides, much like smokers for nicotine. More drastically, neonicotinoid cut bees’ sperm count and scramble their memory and homing skills.

The ban is celebrated by beekeepers and environmentalists, but cereal and sugar beet farmers warn it could leave them defenseless in protecting their crops against harmful insects,  The Telegraph reports.

Introduced in the mid-1990s, synthetic neonicotinoid share the chemical structure of nicotine and attack the central nervous system of insects.