DNIPRO, Ukraine – Everyone was surprised when the war in Ukraine started. In the weeks before February 24th, many people thought Putin was simply playing hard-ball and his massive military build-ups and war maneuvers were only a bluff.

War isn’t new for Ukraine. Ukraine was the site of many bloody battles against Fascism in WWII. Millions of Ukrainians slaughtered in that brutal world war, both civilians and many anti-facist fighters.

Throughout the 20th Century there were many uprisings asserting Ukrainian sovereignty, before and after WWII. Ukrainian nationalism was extinguished by the Soviet Union.

It wasn’t until the fall of the Berlin Wall, were we finally free to fly the Trident, our national symbol, as a nation once again in 1992.

But there were already dark clouds on the horizon back then.  A bitter little KGB agent named vladimir putin took over the russian Federation and plotted a return of the Soviet Empire.

Putin described the end of the Soviet Union as the greatest geopolitical tragedy of all time. So it wasn’t long before he was scheming to invade Ukraine.

Putin’s first move was the surprise invasion of Crimea and the war in the eastern Donbass region of Ukraine in 2014. This led to years of a brutal conflict that evolved into the stalemate of trench warfare by the time of russia’s multi-pronged invasion of Ukraine in February 2022. 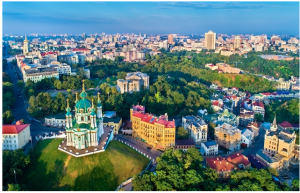 (Kyiv -the capital of Ukraine)

Now as a country, Ukraine is accustomed to violence and instability in practically every part of our existence, which is a horrible fact to admit.

The war prompted us to reconsider our life’s values, relationships, and aspirations, just like any other significant hardship.  My team at PrimeGen was helping cannabis financial news media company, Highly Capitalized. We had been helping both promote Highly Capitalized and their clients by building awareness through one-to-one social media outreach. 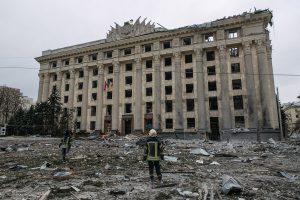 PrimeGen, at one point, had a team of over 50 people focussed on generating leads via LinkedIn for HCN Network and other clients in cannabis.

This is not uncommon in Ukraine. A lot of my peer group work online for US-based companies. We have a good education system here in Ukraine with world class technological schools. Many US tech companies have people working for them in Ukraine.

Interestingly, Highly Capitalized website was designed and developed in Ukraine by a great development team in Kharkiv that has since fled Ukraine, and relocated to Oregon.

But the war crushed quite a few wonderful plans for us. I have colleagues who lost all their family and friends murdered by the russian terrorists or killed during the invasion. I know many whose homes have been wrecked by the indiscriminate russian bombing.

From a business perspective, russia’s brutal invasion pushed many businesses online. Fortunately, most of my work was done online and remotely already due to the pandemic.

Also, the nature of my work means I can be at home just as productively as being in an office. That was part of the success of PrimeGen, we kept our overheads low because we all are remote workers.

In addition to worrying my team and my family, I volunteered to join a battalion of territorial defense. I was a machine gunner and had a brand new 50 Caliber machine-gun (“God Bless America and the Browning M2”) under my care. I don’t like to talk about my life in the battalion as friends have died (and, unfortunately, are still dying on the battlefield). 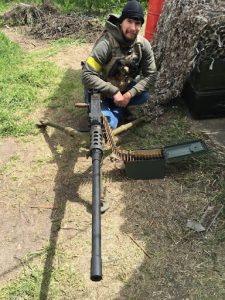 (The Author with a 50 Calibre machine gun)

With the ebb and flows of the war, I am currently in the Army reserves until I am needed. So I focus now on ensuring my team’s wellbeing.

I was particularly inspired by one of our president’s speeches. President Zelenskyy described the importance of the military front and the economic front. Without revenues coming into Ukraine, it would be hard to sustain the defense of the country from the russians.

I noticed many Ukrainians currently working incredibly hard online like cyborgs, striving to restore their life while still giving their all to the success of the business.

Therefore, I decided I wanted to make an impact and I doubled down in my online work getting a new job at Smplfy.

In order to manage more complex programs and equipment, workers must constantly improve their abilities in response to the daily quantum jump in technological advancement. It requires time and effort.

Smplfy strive to make a wide variety of highly functional yet easily usable IT goods so that people’s digital experiences are made simpler. From the landing page for the one-time event, all the way up to building custom software or mobile applications.

Like my own team at PrimeGen Team, we are a tight-knit group of IT performers with a clear organizational structure and a set of core beliefs.

I love the client focus at Smplfy and I am learning more each day. I like the fact we are dedicated to incorporating our clients’ ideas into top-notch digital products without making people’s lives more difficult. We make it easy for our clients – we simplify. Outside, it is light and elegant, inside, it is orderly and logical.

I am proud of our capabilities as a team of Ukrainians. We know so many different software intimately like: React/Angular/Vue JS, Node JS, Laravel/PHP, WordPress, MongoDB, SQL, Sketch, XD, Figma CSS3, Java, JavaScript, .NET, C/C+/C++/C# – are just some of the technologies and coding languages we use.

By the way, if you are reading this, we value our time and your energy, therefore we work diligently and effectively. If you agree with our guiding values, we’ll be happy to collaborate with you. You’d be helping the economic front in the war against russia too!

So in summary, the war has affected my team in Cannabis media, my family and my country in such profound ways we won’t know the full effects until years from now– after we have defeated and hopefully demilitarized russia.

But, paradoxically, it’s also given us a new pride and shown the world what we are capable of as a Nation of people. Our next victories will be in the economic fronts as our post-war reconstruction will help rebuild our country into a modern technologically advanced democracy.

About the Author: Denis Federenko is a Ukrainian entrepreneur and businessman, and part of our team at Highly Capitalized. Despite living in the Dnipro region that is close to the war’s frontlines, Denis tries to bring his best to the people he loves and cares about. He also promised to get back to the HCN Network full time, as soon as possible, and meanwhile – is helping his clients and partners with his many skills. You can contact Denis at [email protected]