PARIS, France – Decree 2020-1230 which allows the launch of a new broad-based research into the therapeutic benefits of cannabis among the French, has finally been published in the French Official Journal; a typical step in heralding new medical research in France.

The research is set to begin “at the latest” on March 31, 2021, according to the decree, and calls for the study using a base-size of 3000 patients with illnesses including: extreme epilepsy, cancers, multiple sclerosis, incurable diseases, and for which the usual treatments have proven ineffective. 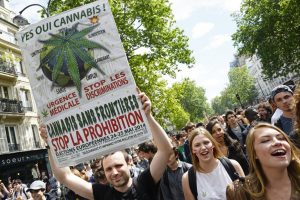 Protesters march for the legalization of cannabis and medical cannabis.

However, French patient advocacy groups claim the base size should be expanded significantly.  “3000 patients, of course that is little, too little. We, patients, see this as more than research, enlarging the base size could help benefit more people,” according to Marie-Madeleine Gilanton, president of d’Appaiser, an association which brings together 500 people with syringomyelia and which receives many requests from members on a daily basis asking them how to obtain therapeutic cannabis.

Now that the decree has been published in the Official Journal, a series of decrees setting out in particular under what forms and conditions cannabis can be prescribed and issued must be published. Moreover, even though no funding is foreseen for the moment, French politicians will have to set a budget necessary for the implementation of the research.

France’s cannabis laws are famously the most draconian in Europe. Cannabis has been illegal in the country since 1970, the state doesn’t allow medicinal use. You’re assumed to be trafficking cannabis which has significant penalties, even if caught with a small amount for personal use.

France has the highest reported use of cannabis in Europe. Between 2015 and 2017, according to Statista, 11% of the French population said they used cannabis in the past year, the highest of any European country. Cannabis in France dates back to Napoleon’s Egyptian Campaign of 1798 when due to a lack of alcohol, his troops turned to cannabis instead. Even though Napoleon banned the drug, cannabis popularity continues.

Dublin - According to the publisher, the global industrial hemp market size is estimated to be valued at USD 6.8 billion in 2022 and is projected to reach USD 18.1 billion by 2027, recording a ...