HCN Investigates: What Are The Market Dynamics Of North America’s Emerging Psilocybin Industry?

We look at how is the psilocybin market developing, and what are the hottest psilocybin stocks? Dive into part one of our investigative series into psilocybin.

In modern times, psychedelic plant use is stigmatized throughout the developed world. Some indigenous cultures still use psychedelic plants, drawing the attention of Westerners searching out everything from unconventional psychotherapeutic techniques to spiritual bliss.

Psilocybin, a chemical cousin of dimethyltryptamine (DMT), is a psychedelic compound derived from a variety of different mushrooms found in Latin America, notably Psilocybe mexicana. This substance is strongly bioactive at very low doses, and it leads to intense euphoric, dreamlike visions and hallucinations when consumed in high doses.

It’s relatively simple to isolate the psilocybin molecule using industrial lab equipment. Just as cannabis used to be something furtively sold in bags in alleyways but is now scientifically produced and semi-conventionally marketed, “magic mushrooms” are suddenly looking a lot less scraggly and a lot more professional. 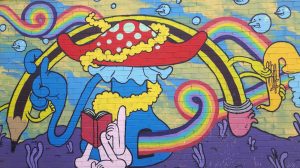 How does psilocybin work?

Immediately upon ingestion, the body converts psilocybin into psilocin, which interacts with your serotonin receptors. Serotonin is the main neurotransmitter governing mood, leading to interest in psilocybin as a potential antidepressant drug.

Scientists are still investigating the exact mechanisms of action of psilocybin in the human body. We aren’t exactly sure what causes this chemical to be strongly psychedelic at high doses.

What are the benefits of psilocybin?

Use of psilocybin in psychotherapy is gaining mainstream attention. A flurry of experiments in the 60s and 70s petered out as the feds took a hardline stance on anything non-prescribed and mind-altering, but the torch of hard psychedelic research has been relit.

Lots of drugs are dangerous. Some of the prescribed ones are the most dangerous of all.

Psilocybin, on the contrary, sends fewer people to the ER than any other prohibited drug. It does not appear to be addictive, and its toxicity seems to be negligible.

While many a psychonaut has tripped too hard on magic mushrooms, no one has actually died from using psilocybin. There’s limited evidence that people have safely used psilocybin-containing mushrooms continuously for thousands of years.

Is psilocybin safe for human consumption? Ultimately, we’ll have to wait for the authorities to weigh in before we make any definitive statements. Early signs look good, though. 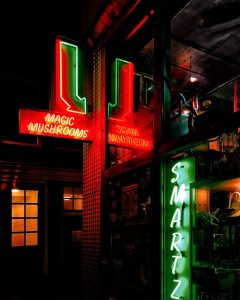 In the November 2020 election, Oregon voters chose to legalize psilocybin along with decriminalizing possession of small amounts of almost every recreational drug. Joined by the District of Columbia, Oregon is the first state to put psilocybin on a more-or-less equal standing with THC.

If you’re in Oregon or DC, state or local governments say you can possess and use psilocybin. Things are still tenuous, but stakeholders are optimistic that upcoming potential federal cannabis legalization could pave the way toward a more reasonable perspective on psilocybin.

Over the next few years, we may see a domino effect of cannabis-friendly states adopting measures similar to Oregon’s. It’s not unrealistic to expect federal psilocybin rescheduling and regulation before 2030.

In Oregon and Washington DC, recent psilocybin legalization measures apply only to strict medical applications of the compound itself, not general use of psilocybin-containing plants. Both pieces of legislation are accompanied by measures that also decriminalize, but not legalize, psilocybin-bearing fungi.

Throughout the rest of the country, “magic mushrooms” or any other substance containing psilocybin remain illegal. Possession of psilocybin-containing substances could land you in jail even though a pervasive easing up of psilocybin perspectives is inexorably spreading across the nation.

Throughout 2020, the Canadian government offered a variety of exemptions from the Controlled Substances Act to individual citizens, allowing them to use psilocybin for depression and in end-of-life situations. Then, in December, Health Canada gathered 16 medical workers from across the country to receive psilocybin products for personal use and evaluation.

These actions could foreshadow more definitive action on psilocybin from the Canadian government. Indirectly supporting this supposition is the blind eye that’s been turned toward the proliferation of psilocybin stocks, which, again like cannabis, have largely gravitated to Canadian markets.

Where can you buy psilocybin?

It looks like psilocybin won’t be handled like cannabis or alcohol — at least not yet. Just as cannabis was once only available for strict medical purposes, Oregon and DC have put in place similar measures dramatically limiting legal psilocybin use.

Keep in mind, however, that Oregon just decriminalized possession of psilocybin along with lots of other recreational drugs. So, even if you don’t get your psilocybin through state-sanctioned programs, Oregon, like DC, plans to take a hands-off approach.

In DC, there’s even a semi-sketchy website selling psilocybin-infused chocolates for delivery. Since everything’s so new, it’s not clear how authorities might clamp down on out-in-the-open marketing of newly decriminalized substances like psilocybin.

Who is producing psilocybin?

Right now, psilocybin production is mainly limited to highly funded operators with heavy scientific research backgrounds. Access to special regulatory permissions is currently key to operating in the psilocybin space, and being deemed worthy of these permissions requires clout.

You won’t find your average slightly stoned cannabis processor here. Early psilocybin operators are, down to the last one, clean-cut, professional, and dripping with liquid capital.

What is are the psilocybin business models?

There are three business models emerging for psilocybin: microdosing which is a similar business to OTC sales of CPG products; short weekend retreats with pre-and post trip integration, similar to a Ketamine clinic model. And month long retreats which have a more extensive protocol that could last weeks or months, like RISE in Jamaica.

What are the top psilocybin stocks?

In part two of this series, we’ll explore each of the following publicly traded psilocybin companies in more detail. For now, let’s briefly summarize:

Cybin made headlines by raising $100 million in an IPO in October 2020. Widely considered to be one of the most highly capitalized operators in the psilocybin space, Cybin is a life science company that intends to perform clinical trials and acquire companies active in additional psychedelics.

Based in Vancouver, BC, Lobe is more focused on the medical research side of the psilocybin industry. In November 2020, Lobe announced a partnership with the University of Miami to investigate the utility of psilocybin as a treatment for brain injuries and PTSD.

In March 2021, Numinus, an established non-psychedelic wellness company, announced a $40 million IPO to develop its psilocybin capabilities. Numinus intends to focus on the psychotherapy side of psilocybin.

RVV is a more modest venture devised by way of an acquisition agreement with Psilocin Pharma, which had already developed unique psilocybin treatments. Revive Therapeutics intends to focus on the utility of psilocybin for liver disease, inflammation, and mild TBI.

Mind Medicine (MindMed) was the first psilocybin company to list on the Canadian NEO exchange in mid-2020. Backed by investments from Canopy Growth and Shark Tank’s Kevin O’Leary, MindMed intends to explore the therapeutic utility of psilocybin for opioid addiction.

How is the psilocybin industry funded?

The fledgling psilocybin industry is funded from a variety of different angles. IPOs generally take place on the CSE, NEO, or other Canadian exchanges, and in other ways, psilocybin is treated largely like cannabis when it comes to funding.

In fact, the psilocybin industry is shaping up to fit the grooves already worn in by the cannabis industry, sliding itself into more mainstream market acceptance. With the help of big capital from cannabis, wellness, and medical research operators, psilocybin is set up to be the slightly more serious and medically professional companion of cannabis from an investment perspective. 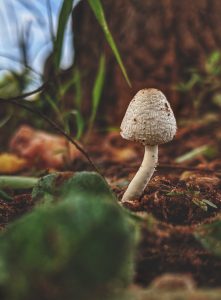 Is it smart to invest in psilocybin?

Now seems to be the calm before the storm when it comes to psilocybin. All signs indicate that the psilocybin industry is spinning up to leverage massive volumes of capital, turning psilocybin into an investment vacuum with very promising long-term return potential.

Psilocybin stocks may even be viable from a short-term perspective. If leading analyses are on-point, between now and early 2022 could be a huge period of growth for psilocybin-related industries in North America and beyond.

Will psilocybin be legalized?

In the long term, the answer is almost certainly yes. We’ll know more once the federal cannabis situation is settled, but there are a few very strong factors going in psilocybin legalization’s favor.

First, the substance may be even more medically useful than any cannabinoid. Thoroughly, definitively non-addictive, psilocybin also appears to have significant psychotherapeutic potential.

Once the cat’s out the bag, regulators initiate an intricate territorial dance with producers to determine strict standards of marketing and retailing behavior. The first motions of this dance have just begun, and now it’s time for cautious optimism as the world gradually absorbs the true impact of the shroom boom.

EDITOR: It should be stated that psilocybin is still illegal in most of the USA and the world and should only ever be taken after consulting with your medical professional.