Investors: A Perspective on Cannabis Stocks

State by state, the movement spreads. A few years ago, the map only had a few states in green.

Toady, most of the United States allows some form of legal cannabis.  It’s just a matter of time before it is be legalized for recreational use on a federal level.  The states in blue are fully legal cannabis states. The green below just allow some form on cannabis use (and the “D” means decriminalized): 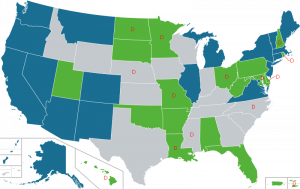 The morality of using cannabis aside, it’s obvious that there is opportunity in this expanding market. But the cannabis industry still struggles with some unique problems. For example, most large financial institutions won’t work with the companies that sell medical cannabis.

Despite the setbacks, cannabis is set to become a major part of our economy. There is a lot of potential for investors and entrepreneurs.  There are already several marijuana stocks out there for investors to buy.

Some are comparing it to the California Gold Rush back in 1849. That is a fair analogy. Like the gold rush, there is money to be made. An entire industry has grown up around legal weed. And it’s likely that this is just the beginning.

Figures are murky, so it’s tough to accurately figure the total potential of the pot industry. But it is getting larger every year. According to Forbes, MMJ was worth approximately $9.2 billion in 2017. Some estimate it will be worth around $47 billion a year by 2027. That’s a huge growing trend!

There are many people who are making money from legal cannabis. Cannabis has created jobs that didn’t exist just a few years ago. Some of these opportunities are limited to people living in states with relaxed pot laws. Others are available to all of us.

How can investors and entrepreneurs take advantage of this trend? Let’s look at 9 market and business opportunities available for those who choose to enter the legitimate weed market, from investing in marijuana stocks to other opportunities.

It’s important to note that pot stocks are some of the most volatile investments out there currently. Given that the industry is small and growing, Federal law is still murky, and they are small cap stock in general, many of these stocks aren’t likely the best investments.

Similar to invest in penny stocks in general, there is high risk here. However, there is also the potential for high reward.

Given the odd business climate in the United States, many pot stocks are located in Canada and trade on the exchange there. There are a few stocks that trade on the NASDAQ or NSYE in the US, and that number is tarting to grow.

Here are some major focuses for investors.

It all starts with the seeds and plants. Growing marijuana is a science. Individuals can start with just few plants as allowed by state law. The larger organizations employ master growers, hydroponics farmers, and botanists.  Think of this like a professional agriculture operation – if legalization occurs, mainstream farmers may switch to this crop as well.

In fact, the University of Mississippi has restarted it’s “legal” growing operation to fund studies for various government departments all over the United States. This is a good sign for other marijuana growers.

The dispensaries take on lots of risk.  They are the pharmacies that sell medical cannabis.  However, they have doors to kick down, and the Federal government does it regularly. But that hasn’t stopped them from spreading all over cities in California, Arizona, Colorado, and other states.

Delivery drivers will bring cannabis right to your door. A great opportunity for those looking to get into the weed business with minimal investment.

If you’ve been following the news later, Uber, Google, Amazon, and more are getting into the specialty delivery space. You can even do side hustles as a delivery driver with companies like Post Mates. Adding in weed will only grow this area.

Electricians, construction crews, and irrigation experts are all needed to build large-scale grow operations.  Many cities in areas where medical cannabis is legal already have hydroponic shops that have experts in these areas.

In fact, several investment firms have focused specifically on this area. Just building the equipment and spaces required in the industry can be lucrative.

Trimmers clean up the buds and make them pretty before sale. This seemingly boring job can pay very well. Bud tenders work at dispensaries, ringing up customers and providing them with advice on different strains.  Think of it as the sommelier of marijuana.

A large sub-market. There are a variety of device makers making and selling grinders, glass smoking devices, smoking paraphernalia  etc. Vaporizers are a very popular area of this market.  Many smoke shops are already selling a variety of devices for tobacco use that are used for cannabis.

In fact, Seattle company mCig Inc. is an herbal cigarette and vaporizer maker that has explicitly stated it’s focusing on the cannabis market.

Weedmaps is a great example of how legal weed gave someone the chance to create an entirely new business. And that’s just one example. Countless blogs, weed-themed stores, review sites, and other businesses make money for online entrepreneurs.

As cannabis goes mainstream, the big money moves in. Forbes reports that venture capitalists are investing cash in the industry. Leafly is one example. The cannabis review and dispensary website is a venture capitalist backed cannabis business.

Not everyone is cut out for the weed business. And not all of us have deep pockets like a venture capitalist. But you can still profit from cannabis. Investors can simply buy cannabis stocks and ETFs.

Legal cannabis presents unique and interesting opportunities for investors and entrepreneurs. Once it is legalized on a federal level, it will become a major part of the US economy. There is money to be made in this emerging industry.