Assemblywomen Mia Bonta (D-Oakland) and Autumn Burke (D-Inglewood) participated, as did Sen. Steve Bradford (D-LA), who said in a statement to NORML: “We can give CEQA exemptions for football stadiums but not cannabis? The requirement for a brick and mortar site before you can get a license is as discriminatory as you can get.”

The protest is just one of many planned in the coming months, as the California industry struggles with over-bearing cannabis laws and taxes. Not to mention the discriminatory nature of the laws, as mentioned by State Senator Bradford.

How did we get here? California voters approved recreational cannabis five years ago with Proposition 64. There are now 18 US States and D.C. permitting adult-use cannabis. But the laws set up in each state vary significantly.

One of legalization’s bright & shining goals was to put illicit operations out of business.  It would have been far smarter to work with the legacy growers to help create the conditions to enable them to enter the legal market, instead of trying to run the legacy farmers out of business.

Because of that miscalculation, the opposite has happened, illicit operations, free of tax and bureaucracy, are booming.

On top of this, punishments have been reduced for illicit cultivation. That has incentivized more illicit grows to come on the market. Even if they are shut down, the fines are relatively little, they simply brush themselves off and pop right back up again. 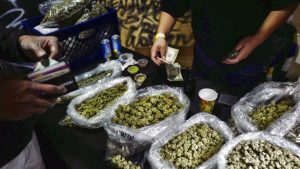 Legal cultivators are drowning in red-tape, bureaucracy and over taxation. A major issue is that farmers still have to pay the same tax systems set 5 years ago. That’s fine when it’s $2500 per half a kilo in 2019, but not so good when prices have collapsed to $300 per half a kilo, due to over production in 2021.

The chaos in the California cannabis market mostly boils down to tax—the new state-regulated system is too expensive for everyone involved. Including consumers. Due to affordability issues, many consumers are switching to illicit cannabis.

In fact, some illicitly grown cannabis varieties are very popular and in many instances, indistinguishable from legally-grown cannabis. Advocates say unless the red-tape, over-regulation and over-taxation of cannabis is solved by Sacramento, the industry will further collapse.

De facto, much of California cannabis is moving back to being an illicit market already. Consumers ultimately will benefit if Sacramento reduce taxes & regulations on legal cannabis and help legacy farmers thrive. One potential outcome will be the consumer price of legal cannabis will fall, to the point where demand increases from the legal market.

Last Thursday’s protest was the latest in an industry revolt over California’s cannabis tax structure. Gov. Gavin Newsom suggested on Monday, last week, that he is open to reconsidering the state’s taxes on cannabis cultivators and purchases.

“This administration supports cannabis tax reform and plans to work with the Legislature to make improvements to California’s cannabis tax policy to assist stabilize the market,” the governor said in a budget proposal unveiled this week.

“There was intention by having that wording in the budget,” Newsom stated at a press conference when asked to elaborate on the phrasing.

”My purpose is to examine tax policy in order to stabilize the market.” Newsom’s budget projects that the state will collect $787 million in cannabis revenue during the 2022-23 tax year.

Without a full overhaul of reform, and with 50% of consumers enjoying raw flower, California’s cannabis consumers will continue finding better deals outside of licensed stores in California cannabis.