LOS ANGELES–Aside from a small number of companies the FDA has permitted to pursue the development of psilocybin therapies (e.g., Compass), the majority of psychedelic mushroom sales in the U.S. currently violate both state and federal law.

As we wait for federal legalization and/or state-regulated psilocybin markets to emerge, what can a motivated entrepreneur interested in mycelium pursue?

While adaptogenic mushrooms can be sold in compliance with state and federal law, there are still legal guardrails. When raising capital in a novel and heavily regulated industry, it is good practice to understand the relevant regulatory restraints so that you can explain to investors how you intend to comply. To that end, here are the regulatory basics you need to understand in seven points (it goes without saying this article grossly simplifies a complex area of law):

The Controlled Substances Act (1970) is the statute that establishes federal U.S. drug policy and regulates certain substances that are set forth on five schedules. Schedule I includes substances that have a high potential for abuse, have no currently accepted medical use in the U.S., and for which there is no accepted safe use under medical supervision.

Psilocybin, psilocin, and marijuana are all listed on schedule I. But unless a mushroom product contains psilocybin or psilocin, or an analogue of those substances, it will not be subject to the strict limitations on sale outlined in the CSA.

The principal statute in the U.S. governing the safety of most foods, food additives, and dietary supplements, including non-psychoactive mushrooms added to or sold as foods or dietary supplements, is the FD&C Act. It dates to the Roosevelt Administration and has been significantly updated since its implementation. Significant amendments include the Food Additives Amendment of 1958, the Dietary Supplement Health and Education Act of 1994 (DSHEA), and the Dietary Supplement and Nonprescription Drug Consumer Protection Act of 2006.

There are strict restrictions concerning the advertisement and labeling of food and dietary supplements, including adaptogenic mushrooms. In fact, violations of these restrictions are one of the more common triggers for enforcement actions. As an example, the FDA sent a letter to a mushroom supplement seller pointing out that claims made by the marketer that the mushroom supplement is intended to prevent, treat, diagnose, or cure disease renders the supplement an unapproved drug. The FDA has the primary responsibility for dealing with labeling and the FTC for the advertising of dietary supplements—you will often see joint letters sent by both agencies because of this dual mandate (see this letter as an example).

Anyone who manufactures, packages, labels, or holds dietary supplements must follow the current good manufacturing practices published by the FDA on June 25, 2007. These guidelines are meant to help ensure product safety. But the FDA does not actively enforce cGMP compliance prior to sale. Instead, the FDA relies on facility inspections and reports of violations. There are third parties that offer cGMP certification labels.

Note that under the guidance provided by the FDA, distributors who work with contract manufacturers are obligated to know how manufacturing is performed so that packaging and labeling can be performed correctly and the decision to release the product for distribution is appropriately made.

The Dietary Supplement and Nonprescription Drug Consumer Protection Act of 2006 created certain reporting and record-keeping requirements for adverse events related to supplements. Essentially, if someone dies or requires medical intervention after consuming a mushroom supplement, a specific form needs to be sent to the FDA. 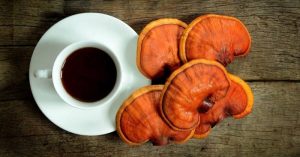 (Image of mushrooms and coffee courtesy of VS)

Generally, federal law does not require dietary supplements to be proven safe to the FDA’s satisfaction before they are marketed unless they contain a “new dietary ingredient” (note that food and food additives are regulated differently). FDA premarket approval is typically not required for dietary supplements. However, new dietary ingredients (NDI), defined as ingredients that were not marketed in the U.S. prior to October 15, 1994, do require a notification to the FDA at least 75 days before introduction into interstate commerce (commonly referred to as an NDI notification).

Another notable restriction, which has become a significant issue with CBD, is the so-called Drug Preclusion Rule. This rule prohibits the sale of a substance approved as a new drug, or licensed biologic or authorized for investigation as a new drug or biologic, except in the case where the substance was marketed as a dietary supplement or as a food prior to such approval or authorized investigation.

The FD&C Act creates a distinction between “food” and “food additives,” which has meaningful consequences for producers of adaptogenic mushrooms because it affects the ease with which FDA may regulate the substance’s sale. A substance regulated as a “food” is presumed safe and FDA can prevent its sale only if FDA proves by a preponderance of evidence that it is injurious to health. By contrast, a “food additive” carries the opposite presumption. A “food additive” is presumed unsafe unless and until the manufacturer shows the additive is generally recognized as safe (GRAS) for its intended use. In other words, if a substance is manufactured with the intent of being added to conventional foods, it must be either GRAS, or approved by FDA as a “food additive,” both of which require “reasonable certainty” of safety.

There is an exemption to this requirement that sellers of adaptogenic mushrooms often rely on, referred to as the “common use” exemption. Under the common use exemption, a food ingredient is automatically GRAS if it was commonly used in food prior to 1958, when the Food Additives Amendment was added to the FD&C Act, and that “common use” demonstrates the ingredient to be safe.

Alternatively, if an additive is unable to meet the “common use” exemption because it is new or used in new ways, GRAS status is achieved by adequately showing through scientific procedures that it is safe under the conditions of intended use (meaning safe at a particular level in a particular type of food). Once a food producer establishes GRAS status, it may send additive-containing products to market free of any premarket approval requirement.

If you’re interested in starting or financing a business in the adaptogenic mushrooms industry, the regulatory restraints listed above will help you to better articulate your compliance plan to potential investors. But remember, this is a complex area of law and this article only touches on the basics. Reach out to VS’s regulatory team if you have questions.

By Charles Alovisetti, Joshua Kappel, Andrea Golan, of Vicente Sederberg © Copyright 2021. All Rights Reserved.  Highly Capitalized thank the team at Vicente Sederberg for this article. You can find the original article here by clicking this link.

AUSTIN, Texas - Hometown Hero CBD, announced that it is developing an edible with CBDA and CBGA as its primary cannabinoids. The company is no stranger when it comes to innovating with new products. Recently, ...

COCONUT CREEK, Fla.- Integrated Cannabis Solutions, Inc., (OTCPINK: IGPK) issues Shareholder update for 2022. The past few years have been spent cleaning up the entity and becoming a fully reporting entity. In June of 2021 ...