LOS ANGELES- Today, Green Street announced their inaugural festival for May 13th & 14th, 2022. The Green Street Festival will feature the city’s top restaurants, the state’s leading Cannabis brands, and the world’s top entertainers all brought together to celebrate the Cannabis community.

The first day of the festival will be a VIP event at the Green Street Building, a 67,000 Sq Ft Cannabis business epicenter in Downtown Los Angeles, and feature a once in a lifetime performance with Harry Mack & Gary Vaynerchuk.  “People want to either be educated or entertained. We are going to do both” says Vaynerchuk. Day two of the festival will be at a historic outdoor venue in Downtown Los Angeles featuring a host of locally driven performances from local Los Angeles based artists, a one-of-a-kind completely improvisational performance from world renowned freestyle artist Harry Mack, a Keynote from culture and relevance thought leader Gary Vaynerchuk, plus an incredibly special performance lead and curated by Grammy & Academy Award winning artist Juicy J; billed for the first time ever as ‘Juicy J & Friends’.

Helping curate the food dynamic of the festival is culture icon Jon Buscemi. This integral portion of the festival will highlight Los Angeles’ diversity and prestige as a leading and established culinary mecca. Being featured are unique and properly executed dish creations by a dozen of the city’s best restaurants & chefs including Yeastie Boys, Afters Ice Cream, Gusto Green, and Uncle Paulie’s Deli to name a few. “Traditionally, Cannabis festivals have the most basic of food offerings like funnel cake and trash pizza, but we know our guests would prefer better options so we’re bringing the city’s top culinary destinations together to feed the cannabis community” says Jon Buscemi. 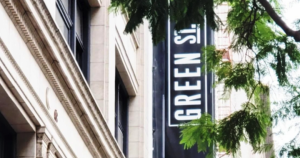 Contemporary artist Cody Hudson, known for his design work under the alias Struggle Inc., was brought on as a partner to create and establish the visual identity of Green Street Festival. “It’s been a wonderful project! Being able to have my vision for the festival’s graphics and aesthetics help to transform the space and everything inside of it, I’m just really looking forward to the ways we’ll be bringing cannabis, food and music together in one space and tying them all together visually” says Cody Hudson.

“Weed is the headliner of this festival. We’ve been to countless Cannabis events across the country and we as attendees want to smoke weed with our friends and check in with the community, eat delicious food, and then be entertained… in that order” says Rama Mayo, Green Street President.

Tickets and more information available now for both days of the festival at GreenStreetFest.com