MariMed and the ice cream magicians at Emack & Bolio’s will create a line-up of cannabis-infused vegan and dairy ice cream in outrageous flavors. The ice cream will contain MariMed’s superior formulations that include the same full spectrum of natural cannabinoids and terpenes from whole plants as are used in MariMed’s award-winning brands, such as Betty’s Eddies™ and K Fusion™.

This new category of cannabis products is expected to debut in Massachusetts this year, followed by launches in other legal cannabis markets.

Emack & Bolio’s was founded in 1975 by Boston music attorney Bob Rook as a place for his rock star clients to satisfy their midnight munchies after their late-night gigs. Aerosmith, Boston, U2, James Brown and The Cars were some of the groups Rook worked with back in the day. Emack & Bolio’s has evolved into a cult favorite in Massachusetts and in stores around the world.

“This partnership is gonna ROCK,” said Bob Rook, CEO and Creator of Emack & Bolio’s. “The combination of our unique flavors with MariMed’s cannabis expertise is a natural. There is a good vibe between our companies, and our vision is the same. I’ve been wanting to do this since 1975. As the Grateful Dead said, ‘What a long, strange trip it’s been.’” 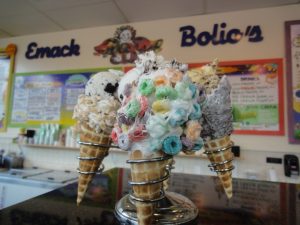 “We’ve taken great care to grow MariMed infused products to become top-selling brands, with much of our success the result of a craft-like approach to cultivation that is unlike most other national cannabis companies,” said MariMed CEO and President Bob Fireman. “We’re excited to bring our unique formulations and technologies to a collaboration with a brand partner like Emack & Bolio’s, which has such a fantastic history.”

Commented MariMed Chief Products Officer and SVP/Sales Ryan Crandall, “Ice cream and cannabis would seem like a natural pairing but deciding to launch this product line now – particularly with the inclusion of vegan SKUs – was driven by the consumer insights that our R&D team is always studying to identify trends that can drive our innovation.”

Crandall points to market intelligence company Mordor Intelligence, whose recent study determined that the anticipated 3 percent growth in the ice cream market over the next four years will be driven by “better for you” product options made of natural flavors, natural sweeteners, and handcrafted ice cream.

This release contains certain forward-looking statements and information relating to MariMed Inc. that is based on the beliefs of MariMed Inc.’s management, as well as assumptions made by and information currently available to the Company. Such statements reflect the current views of the Company with respect to future events, including estimates and projections of revenue and EBITDA and about its business based on certain assumptions of its management, including those described in this release. These statements are not guaranteeing of future performance and involve risk and uncertainties that are difficult to predict, including, among other factors, changes in demand for the Company’s services and products, changes in the law and its enforcement, and changes in the economic environment. Additional risk factors are included in the Company’s public filings with the SEC. Should one or more of these underlying assumptions prove incorrect, actual results may vary materially from those described herein as “hoped,” “anticipated,” “believed,” “planned, “estimated,” “preparing,” “potential,” “expected,” “looks” or words of a similar nature. The Company does not intend to update these forward-looking statements. None of the content of any of the websites referred to herein (even if a link is provided for your convenience) is incorporated into this release and the Company assumes no responsibility for any of such content.

All trademarks and service marks are the property of their respective owners.

(This information is primarily sourced from MariMed.  Highly Capitalized has neither approved nor disapproved the contents of this news release. Read our Disclaimer here).